Pitfalls of the personal pronoun. 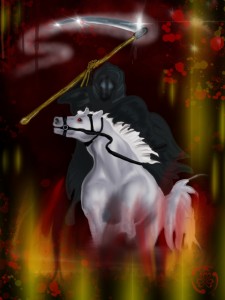 If we are told something often enough, sooner or later, we begin to believe it. This is the case of the personal pronoun. Pronouns such as I, me, mine etc.

In clear perception of ones direct experience one begins to see that the “I” that we hold to and attach things to exists nowhere else other than in language. It is useful, like naming a location to differentiate one place from another place but naming it doesn’t make it real, self existent etc. It still remains a collective noun for a multitude of phenomena which itself may be named but again compounded.

This assumption that the “I” exists is like a collective hallucination. It exists only because we believe it exists however, upon investigation of direct experience, we see it for the illusory construct it is. When seen for what it really is it seems absurd to attach anything to something that is just an illusion. As the late, great Jimmy Hendrix once said;

castles made of sand
fall into the sea
eventually

We try to attach a real something to nothing and then suffer when others don’t agree with our story.

Pronouns are useful in language as are name places on a map but extending them beyond the convenience of language is the realm of the unenlightened, the realm of unsatisfactoriness, pain and suffering.

There is a whole lot of unhelpful baggage that arises from belief in the personal pronoun. At the very least, we create a fictional separation between ourselves and the world we live in (subject and object). At worst, we will fight for, defend and even kill in support of this illusion. It seems an irony that we spend so much time acquiring stuff to assuage the sense of not having enough, so much time trying to become whole when, if we drop the belief in a personal pronoun, we already are whole and part of everything.

It is our conditioning and maybe our choice to believe in the personal pronoun that we cannot imagine being any other way of being but if you take the “I” out of “I breathe” what happens? If the “I” was real and you took it out of the equation there would be some measurable difference to “I breathe”. At least in my case, breath continues 🙂 phew! The only change is in the storyline. The act of breathing continued just fine.

Most of what happens to this illusory self happens on its own without any reference to a self be it illusory, or if you remain to be convinced, even the so called self. Breath breaths, eyes see, nose smells, thoughts arise etc all without any doer. When one starts to see through the labels and the value judgements that inevitably come with them we return to the simple bare experience in which the doer, the to be done and done disappear and there is just this and this is just fine!

There is a simile of the spiritual life that seems to fit.

A person is walking along a street and falls in a hole. The next day they see the hole but just a little to late and end up in the hole again. The next time they pass that way they spot the hole and try to leap it but don’t quite make it. Soon they come again and having prepared for for it they leap and clear the hole.

Another person comes along and spots the pitfall and chooses to go another way.